The Winamac Athletic Department inducted the Hall of Fame Class of 2017 on January 27th. Inductees were: 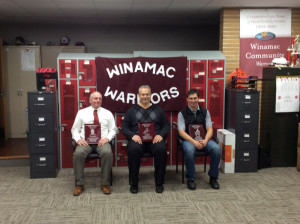 Dave Pugh – Dave was an outstanding  two-sport athlete while at Winamac, participating in both basketball and golf. During his four-year career, Dave set the single game scoring record (44 pts) in basketball and is the career all-time leading scorer with 1,329 points. Dave was also 2-time regional medalist for golf. Dave went on to play golf at Purdue University, where he was a four-year letter winner. During his senior year at Purdue, Dave was named captain and Most Valuable Player for the Purdue Men’s Golf Team. He also earned Purdue Athletics Academic Honors during his senior year. After graduating from Purdue with a business degree, Dave earned his PGA Professional license. He is currently the PGA Golf Professional at Mystic Hills Golf Course in Culver.  Dave also owns his own contracting business. Dave has also coached varsity golf and middle school basketball at Winamac. His golf team won the Sectional Championship in 2000. Dave currently lives in Winamac with his wife, Heather, and their two children (Luke- 18 and Kole – 14).

Troy Schultz – Troy was a standout 2-sport athlete while at Winamac High School, participating in both football and basketball. During his senior year, he led the football team to an undefeated regular season and Cluster Championship; as well as the basketball team to a sectional championship. Troy received a scholarship to play football at Ball State University and earned 4 varsity letters while playing there. He was selected captain his senior season as well as 1st team All-Conference for the Mid-American Conference and Honorable Mention All-American. After graduating from Ball State University, Troy went to work in the sales industry. Troy is currently a sales manager for Thor Industries and has been married to his wife, Holly, for 26 years and currently live in Culver. They have three children (Tucker, Tatum and Tristen).

Steve VanDerAa – Steve was the varsity wrestling coach at Winamac High School from 1989-2009. During that time, his teams won 14 conference championships, 9 sectional championships and 1 regional championship. His career record during that time is 404 wins and 96 losses. Steve was voted conference Coach-of-the-Year 13 times and has had numerous wrestlers qualify and place in the state wrestling tournament and has coached 1 state champion. In 2009, Steve was inducted into the Indiana Wrestling Coaches Hall-of-Fame. Steve is a retired state police officer and currently a college professor at Ancilla College. In 2016, Steve started the wrestling program at Ancilla College and is currently their head wrestling coach. Steve currently lives in Winamac with his wife, Holly. They have two children (Nathan and Scott).